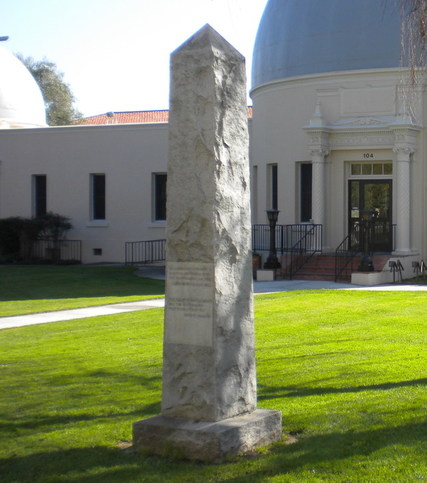 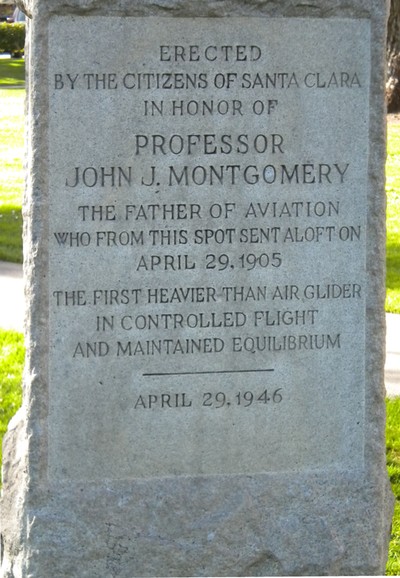 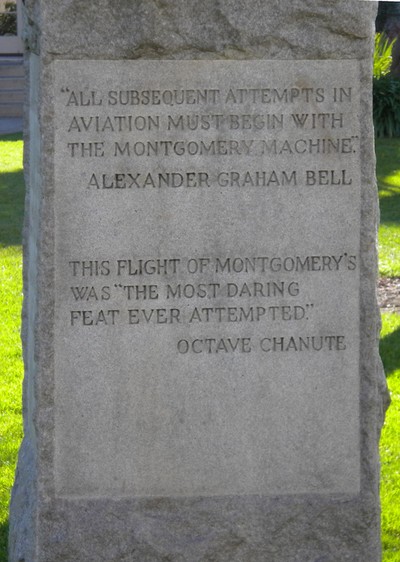 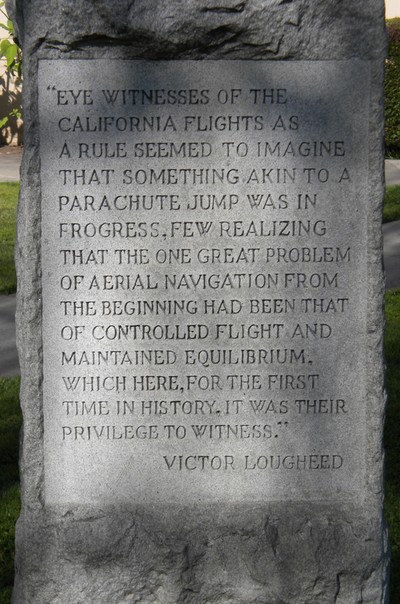 This obelisk commemorates the flight of Montgomery's tandem-wing Santa Clara aeroplane on April 29, 1905, in a special exhibition at Santa Clara College. Daniel J. Maloney piloted this aeroplane in a controlled flight from 4,000 feet, having been lofted to that altitude by Frank Hamilton’s hot-air balloon. This flight was witnessed by a reported 1,500 people and lasted about 15 minutes, with Maloney landing softly at a pre-appointed location, half a mile from the college grounds.
​
Thomas Noonan, a writer for Motor magazine, described the flight he witnessed: "(A)fter an initial drop of a few feet, the aeroplane settled to leisurely floating through the air in the manner of a great soaring bird. It circled about at the will of the operator, maneuvered to right and to left many times, and on several occasions made long downward swoops terminating with shorter upward sweeps by movement on an upward incline in the teeth of the light wind that was blowing." 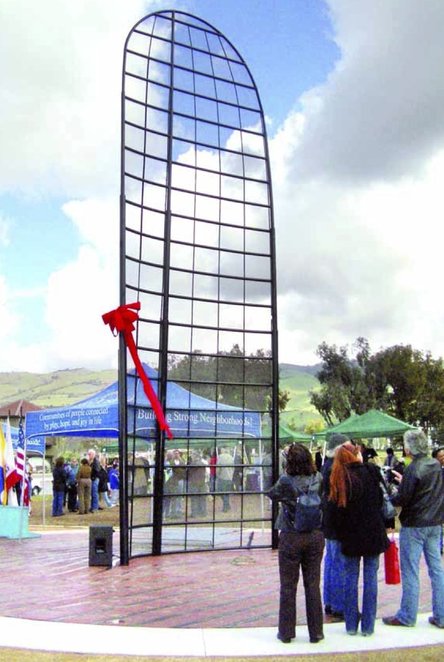 Monument at Evergreen, San Jose
Evergreen Times Article
In the last week of October 1911, Montgomery and his two mechanics (Cornelius Reinhardt and Joseph Vierra) set up camp in the Evergreen Valley on the Ramondo's ranch. Using wooden rails to assist takeoff from a hill, they performed 55 successful flights with the newly-designed Evergreen monoplane, landing back on the top of the hill or in the grassy valley below. This was the aeroplane to which a motor would be attached in Chicago.

To reward himself for a very successful week, Montgomery decided to make one last flight. As the Evergreen left the rails, it suddenly rose in the air. He stood up and leaned forward to redistribute the weight and lower the nose. But the glider slipped sideways and then, only a few dozen feet above the rails, rolled over. It hit the ground upside down, and because he was standing, it threw his head onto one of the stove bolts that secured the wing to the airframe. He died from his injuries three hours later, at the age of 53, on October 31, 1911.
​
This monument, dedicated on March 15, 2008, replaces the one named "Montgomery Hill" that was erected in 1967. (See below.) 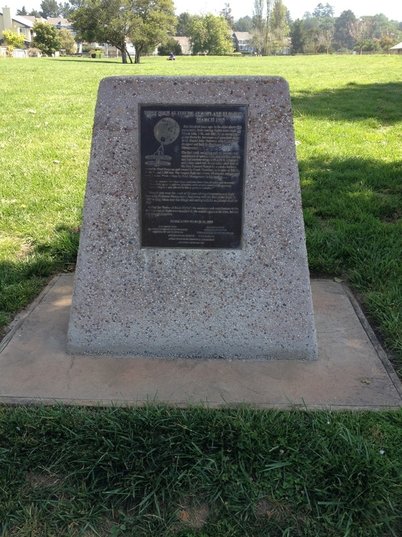 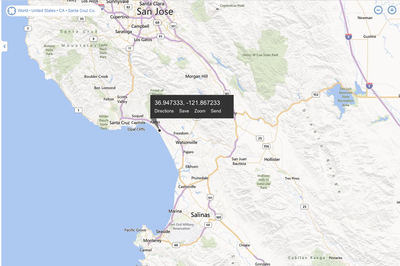 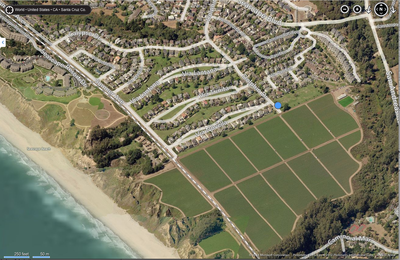 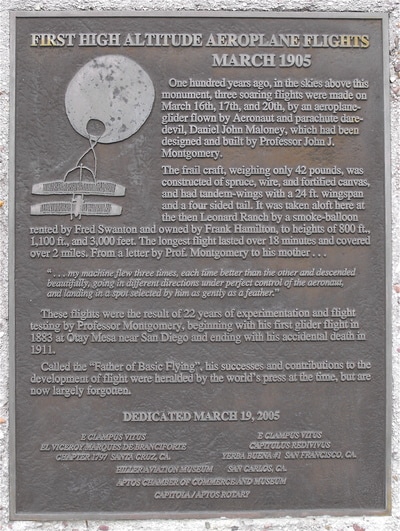 During these flights Maloney circled, rose in the air, dove and flew straight–under perfect control. He brought the craft to the ground by making it hover in midair and slowly settle to the ground so he was able to land, standing upright, holding the aeroplane.
​
About thirty people witnessed these flights, including a reporter from a Santa Cruz newspaper who wrote about the first flight. These were the first flights in the world from high air, controlled by a man who landed safely. It would take another five years (until 1910) before powered machines would fly at this altitude. 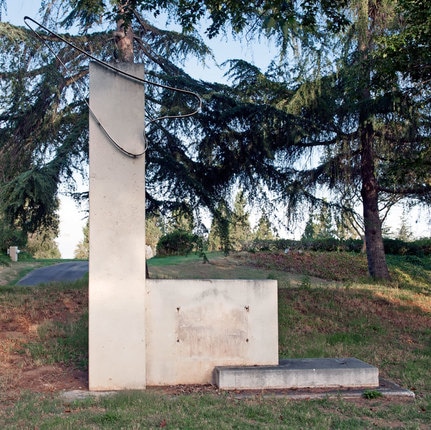 “Three-quarters of a mile northeast is Montgomery Hill, site of the 55 successful flights of John Joseph Montgomery's 'aeroplane' that demonstrated aerodynamic developments still indispensable to modern aircraft. Montgomery combined his engineering skill with the basic principles of aerodynamics that he discovered to produce a heavier-than-air flying machine which had complete control: cambered wing, rear stabilizer, flexible wingtips, and wing-warping aileron.” 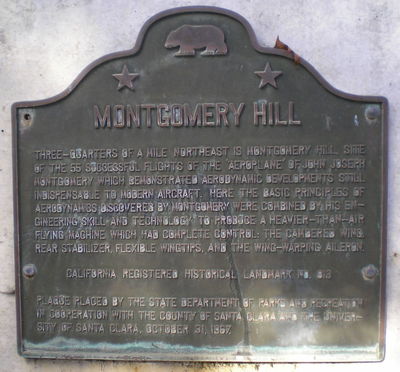 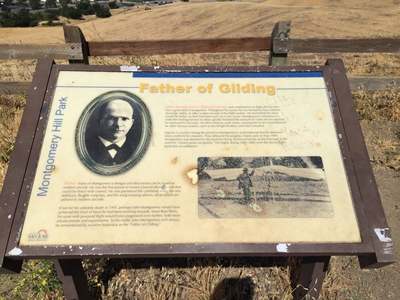 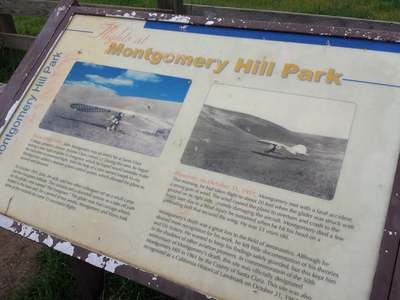 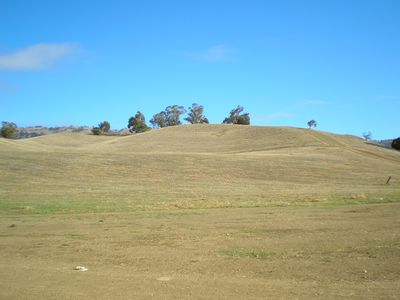 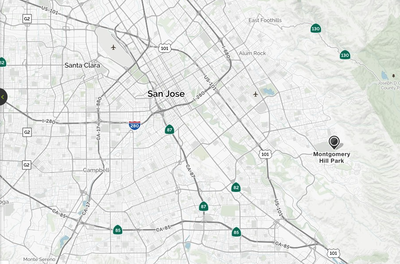 This monument commemorates the 55 successful flights of Montgomery's Evergreen monoplane.
Erected in 1967, it was replaced on March 15, 2008, by the Evergreen Monument. (See above.)
Next: models of Montgomery aeroplanes
Powered by